Home/News/WTO must stop negotiations on new trade deals and focus on access to medicine and saving lives! 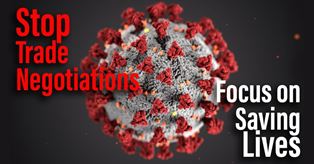 Some 300 international, regional and national organizations including the IUF and international trade union organizations, have called on WTO members to stop all negotiations on new trade deals during the COVID-19 pandemic and focus on saving lives.

“The first and only priority for trade negotiators at this time should be to remove all obstacles, including intellectual property rules, in existing agreements that hinder timely and affordable access to medical supplies, such as lifesaving medicines, devices, diagnostics and vaccines, and the ability of governments to take whatever steps are necessary to address this crisis.”

The letter, which has been sent to the WTO secretariat and to national governments, demands that WTO members “Ensure that all countries have the flexibilities to set aside trade rules that constrain their ability to resolve the pandemic crisis, without fear of repercussions, and to cease other negotiations and activities that divert their energy and resources from that goal.”

Despite the imperative need for governments to concentrate on addressing the COVID-19 crisis, some member governments continue to push for “virtual negotiations”, including on measures which would further restrict access to life-saving medicines, at the WTO and in regional and bilateral trade negotiations. Governments must recognize that the crisis demands “a fundamental re-think of the types of rules that are negotiated in trade agreements, including those that can encourage monopolies and reduce affordable access to all forms of medical supplies, and put at risk the lives of people in every country of the world.”