Workers from a West Bengal tea plantation who participated in a protest last year against the abusive treatment of a pregnant 22 year-old tea garden worker could face prison sentences of up to 7 years, if India’s powerful Tata Group has its way. Mrs. Arti Oraon,  who collapsed after being forced to work while 8 months pregnant on a Tata-owned estate, now faces criminal charges.

Tata is lashing out against nearly 1,000 tea plantation workers and their families living and working on the Nowera Nuddy Tea Estate in West Bengal, India.

Nowera Nuddy Tea Estate is owned by Amalgamated Plantations Private Limited, a company 49.98% owned by Tata Tea, which has now rebranded itself as ‘Tata Global Beverages’ (“a new and strong global brand”, according to Tata). Tata’s wholly owned Tetley Tea is the second biggest-global tea brand, and a leading member of the UK’s Ethical Tea Partnership. Tetley sources tea from Amalgamated – though not, it claims, from Nowera Nuddy, an assertion which it has used to publicly and privately to abdicate all responsibility for documented abuses in its supply chain.

Last August Mrs Arti Oraon collapsed in the field and was brought to the hospital, on a platform towed by a tractor, after the medical officer refused to make an ambulance available. (click here for background).

As news of her treatment spread, some 500 mostly female estate workers gathered in protest at the medical facility, demanding sanctions against the medical officer. Workers’ dissatisfaction was fuelled by systematic abuse of workers’ rights on the plantation, including long-standing problems over the denial of paid maternity and sick leave and inadequate housing.

Local management promised to meet with the workers, but on August 11 the management, along with the medical officer, left the estate and declared a lockout, which lasted two weeks. Tata imposed a second lockout when workers refused to accept the suspension of 8 workers identified by management as ‘leaders’ of the mass protest. The second lockout lasted from September 14 until December 12, during which time the workers received no wages or rations from the company.

In response, the IUF campaigned for an immediate lifting of the lockout. When work resumed, the IUF insisted that all workers receive full back wages and rations for their nearly four months without work, for compensation and an apology to Mrs. Oraon, for an end to the suspensions and an end to a management-controlled ‘domestic enquiry’ and for negotiations between Amalgamated management and the Workers’ Action Committee (established in the early phases of the conflict).

Since February the Workers Action Committee members and the majority of Nowera Nuddy workers have become members of the Progressive Tea Workers Union, a new legally registered trade union in West Bengal. The Progressive Tea Workers Union is recognized by the government of West Bengal and in late April took part in state government-sponsored talks on wages in the tea sector.

Despite the entirely peaceful and legal methods adopted by the workers to seek representation through a trade union and to resolve issues through direct negotiation, Tata’s management at Nowera Nuddy have refused all avenues to resolve the dispute.

There have been no negotiations, no compensation, the workers targeted for suspension remain suspended – and in late April police visited the plantation to announce that arrest warrants had been sworn out for Arti Oraon and 11 other worker activists, including the 8 already suspended workers, on charges, including theft, grievous bodily harm, unlawful assembly, criminal intimidation and unlawful confinement.  These charges can carry prison terms of seven years and more. On May 7, the day Tata Tea became Tata Global Beverages, the workers applied for anticipatory bail to avoid immediate arrest and jail. 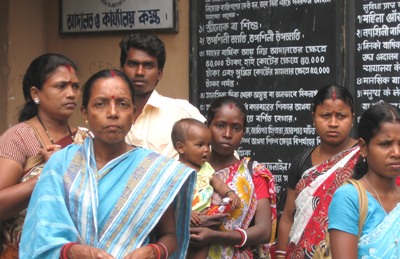 The abusive conditions which gave rise to the protest last year remain unchanged, and management refuses to recognize the workers’ representatives. Tetley’s only response to date has been a December 12,  2009 letter by CEO Peter Unsworth declaring that an “honorable settlement” had been achieved – and that “the pregnant woman [Arti Oraon] at the root of the issue had a healthy baby boy and both mother and baby are well.”

For Tetley, the company which “wants you to enjoy your pregnancy without it being stressful”, Arti Oraon is in fact well enough to go to prison for 7 years after being denied her lawful right to maternity leave while 8 months pregnant. The Ethical Tea Partnership, whose standards commit member companies to, among other requirements, ensure that there is no “harsh or inhumane treatment” of plantation workers, continues on its merry CSR course.

The Nowera Nuddy workers, together with other tea workers in West Bengal and elsewhere in India, are challenging their harsh and oppressive living and working conditions. The arrest warrants are a clear message that this challenge will not be tolerated. Far from Nowera Nuddy, meanwhile, consumers continue to be targeted with ‘initiatives’ and ‘sustainability’ exercises designed to mask the reality of tea workers’ lives and struggles.

Send a message to Tata/Tetley! Drop the complaints behind the criminal charges, cancel all suspensions, provide compensation for the brutal 4-month lockout which pushed workers and their families to the brink of starvation – and start negotiations with the Nowera Nuddy Workers’ Action Committee/Progressive Tea Workers Union to address the appalling conditions on their estate.

You can also use the features provided on the Tetley Tea website to send the company a message, or use the freephone number provided to give them a call!