IUF staff joined demonstrators from international unions and human rights groups including Amnesty International outside the Human Rights Council of the United Nations on February 15 to demand that the situation of Iranian workers and their persecuted trade union leaders be placed  on the agenda of the 7th session of the UN rotational review of human rights. 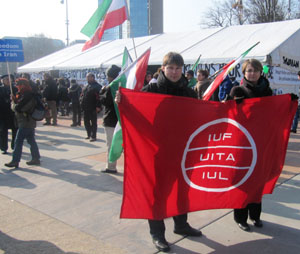 The Haft Tapeh Sugar Workers Union, the Tehran and Suburbs Vahed Bus Company Workers Union and the Free Union of Iranian workers sent a message to the rally and  to the UNHCR calling on the Council to support the demands for Iranian workers to be allowed to live “honorable lives, away from any fear of suppression and threatening environment”. The Iranian unions specifically demanded: