Published: 15/02/2015
Activists of the Alliance of Progressive Labor – Youth (members of the IUF-affiliated SENTRO) picketed a busy McDonald’s outlet in Quezon City, Philippines on February 14 to show support for the IUF campaign against zero hours contracts. The McJobs model – franchising, low wages, few benefits, no job security and fierce opposition to unions – set the pattern for the global fast food industry, including the Philippines’ own Jollibee. 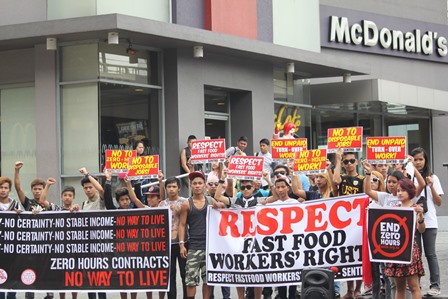 Jollibee, the country’s leading fast food chain, is notorious for its low wages and routine use of “endo”: “end-of-contract” workers with short-term, unprotected work contracts also known as “5-5-5”, where workers are endlessly hired and fired every five months to deny them permanent employment status.