At least two banana workers were killed on July 8 as police opened fire on striking workers in the province of Bocas del Toro. Four thousand workers at the Bocas Fruit Company struck over wages at the beginning of the month, and were joined by thousands of independent producers in the cooperatives with their own grievances. The strike was declared illegal under the recently introduced Ley 30, nicknamed the “Chorizo (sausage) Law” because it stuffs together into a single package anti-democratic measures including legalizing the permanent replacement of strikers, abolishing the union dues checkoff and eliminating environmental impact assessments on construction projects deemed to be ‘socially useful’. The Chorizo Law and related Law 14 criminalize street blockades and establish immunity for police who use lethal firepower against protestors.

Labour and civic groups responded to the introduction of the new laws with protests and strike actions, including a one-day general strike. The government response has been hundreds of arrests and the use of force. Unofficial reports of the July 8 violence put the death toll at 6 and over 120 injuries from bullets and tear gas. Hundreds of union and civic leaders have been arrested. 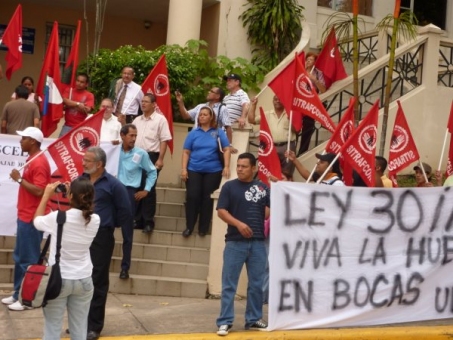 Banana unions and international trade union organizations have protested the violence and the government’s repressive legislative package, calling for the immediate rescinding of the laws, the release of all arrested protestors and political/civic leaders and compensation to the families of the victims of state violence.