Home/News/Three Delivery Accidents in One Week at Nestlé Waters Russia – Nespressure, What Else? 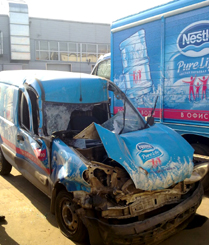 Workloads aren’t all that has increased at Nestlé Waters Direct in Domodedovo, Russia. The Domodedovo workers’ union union sees a direct connection between the brutal increase in working hours and the 6 road accidents that have occurred in as many months – 3 of them in one recent week alone.

Since the company closed one of its three Moscow-region distribution depots in November 2008, days  of 12 hours and even 15-16 are necessary to reach a reasonable level of pay under a system which requires drivers to load and hand deliver 20-kilo bottles of water for as many as 36 separate deliveries daily (click here for background). Under this system of compensation, there is no overtime pay – it’s strictly piece rates plus bonus. Some drivers who joined the union have been reassigned to smaller vehicles, making it difficult or impossible for them to make their quotas – so they set off on their rounds in undersized vehicles, with tons of loose cargo.

On April 5 an accident involved a truck loaded with 180 bottles of water – when safety rules set a maximum of 140. The official explanation is that the delivery driver was over the speed limit. The workers say stress and overloaded vehicles are a recipe for accidents.

On April 6, another accident resulted from brake failure. According to the union, speedup means that as many as half of all vehicles leave the depot with mechanical problems. 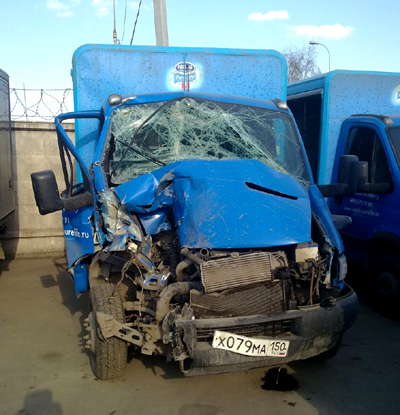 On April 12, driver Dmitry Kotelniko’s service vehicle was crushed in a near-fatal collision with a heavy freight vehicle. Unconscious for 48 hours, he remains in intensive care with serious head injuries. While the accident is still under official investigation, the union believes that it was the result of the chaotic scheduling resulting from the elimination of half the dispatchers, leaving the survivors to do double the work. The day of the accident, the driver’s route was taken up with local deliveries in Domodedovo and a single, longer delivery of dozens of kilometers each way to Moscow – the journey that put him in intensive care.

Since its formation last year, the union has unsuccessfully demanded negotiations on work schedules, overtime and bonus pay. Nestlé has responded with punitive work assignments, pay cuts and sacking the union vice-chairman.

CLICK HERE TO SEND A MESSAGE TO NESTLE MANAGEMENT IN RUSSIA AND SWITZERLAND – STOP NESPRESSURE!